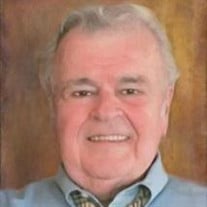 Florist Note- any floral tributes should be delivered by Saturday July 27, 2019 by 10 AM to the Lewes Funeral Home. Edward D. McClain, age 79 of Rehoboth Beach, DE, passed away on July 19, 2019 at Delaware Hospice Center, from complications of leukemia. He was born on February 11, 1940 in Jackson, TN, son of the late Robin and Aubrey McClain. Ed served his country in the United States Air Force before beginning his career with The US Department of Commerce. He retired in 1995 after 34 years of dedicated service rendered to the Government of the United States. Ed and his wife, Pattie, then moved to Rehoboth Beach, DE where they co-owned Pretzel Time and now, Merle Norman Cosmetics. Though they built and managed Pretzel Time together, it was decided early into the cosmetic venture that Ed could have a "pass" on applying and selling cosmetics. Ed loved watching football and had 2 favorite teams: The Washington Redskins and whoever was playing the Dallas Cowboys. Any Redskins losses were immediately attributed to poor refereeing, of course. He was a lifetime member of the National Rifle Association and an avid outdoorsman. Ed enjoyed hunting with his best friends, brother-in-law, and three sons. Hunting trips to the Virginia mountains were most memorable, especially the jokes around the campfire. Ed enjoyed writing and had numerous articles on his battle and journey through CLL published in Cure magazine. His favorite stories to write were about his childhood adventures with his dog, Rex. Somewhere the unfinished works ... the Rex Chronicles ... are just waiting to be published. In addition to his parents, Ed was preceded in death by his sister, Cynthia; and his brother-in-law Bob, both of whom he adored. He is survived by his loving wife of 29 years, Pattie; his devoted children: Robert McClain (Gayla) of Argyle, TX, Kirk McClain (Shawna) of Chantilly, VA, and David Bryan of Philadelphia, PA; his lucky grandchildren: Nathan, Mollee, Collin, Elyssa, Caleb, and Logan; and his special nieces: Gwen, Melissa, and Connie. A Memorial Service will be held on Saturday, July 27, 2019 at 3:00 PM at Parsell Funeral Homes and Crematorium, Atkins-Lodge Chapel, 16961 Kings Highway, Lewes, DE. Interment will be private. Ed’s family would like to thank the terrific staff at The Tunnel Cancer Center, Beebe Home Health Care, and Delaware Hospice. Remembrances in Ed’s name may be made to the Leukemia and Lymphoma Society: 1300 North Grant Avenue, #100, Wilmington, DE 19806. Please sign Ed's online guestbook located on this site.

Florist Note- any floral tributes should be delivered by Saturday July 27, 2019 by 10 AM to the Lewes Funeral Home. Edward D. McClain, age 79 of Rehoboth Beach, DE, passed away on July 19, 2019 at Delaware Hospice Center, from complications... View Obituary & Service Information

The family of Edward D. McClain created this Life Tributes page to make it easy to share your memories.

Florist Note- any floral tributes should be delivered by Saturday...

Send flowers to the McClain family.