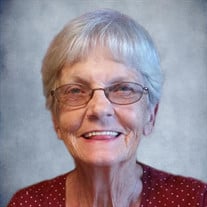 Edna Fay Shufelt, known as Fay, age 78 of Bridgeville, DE, passed away on Tuesday, December 07, 2021, at home surrounded by her loving family. She was born on March 22, 1943, in Wilmington, DE, daughter of the late Marshall T. and Hilda S. (Frampton) Conaway. On September 25, 1964, Fay married the love of her life, the late Ernest F. Shufelt. They were blessed with 51 years of wedded bliss. Fay attended Bridgeville School and graduated from James H. Groves High School. She worked numerous jobs throughout her life, but her favorite job was taking care of her granddaughter, Caitlyn and her grandsons, Nicholas, and Lucas. Once Caitlyn was in school full time, she worked as a manager at McDonalds until her retirement in 2003. Fay had an infectious laugh and wicked sense of humor. She loved her family beyond reason as she always put them first. She was the mother and mommom to many, regardless of blood relation. In her younger years, she loved cooking big family meals, canning, sewing, upholstery work, ceramics, camping, crabbing, fishing, and Nascar. She always lit up when she had company in her most recent years. One of her favorite activities was watching the Price is Right and Westerns. Roller Derby was a huge pastime in her final years as she was fondly referred to as Mommom Brute. Fay was so proud of her granddaughter Caitlyn aka Brute E. Licious for competing in this sport. It was definitely a family activity she loved. Her neighbors became family as she loved them all. She attended Denton First Wesleyan for many years with Pastor Larry Pritchet becoming part of her family. She will be greatly missed as she is loved by many. Fay's family wishes to extend our sincere thanks to Vitas Hospice for their support during this difficult time. In addition to her parents, Fay was preceded in death by her daughters: Tina M. O'Day and Donna Breeding; her brothers: Ronald (Ruth) Conaway, Richard (Mary) Conaway, Larry (Beth) Conaway; and her sister, Ruth (Donald) Coulbourn. Fay was a devoted mother and grandmother. She is survived by her daughter, Carolyn (Ron) Robison; her granddaughters: Caitlyn Rifenburg, Mimi Clark, and Kat McClanahan; her grandsons: Nicolas and Lucas Monson, Michael (Amanda) Breeding, and William Breeding; her bonus grandchildren: Lisa (Paul) Bowman, Timothy (Stephanie) Robison, Corey Robison, Raymond Robison, Mike (April) Dinkle, Rob Hammel, and Baxter Marvel; her bonus daughters: Debbie (Jamy) Ashmead and Margo (Steve) Snay; her closest niece, Suzette (Kevin) Marine; her closest nephew, Richard (Linda) Coulbourn; her sons-in-law: Michael (Nicole) Rifenburg and Glenn Breeding; and a host of nieces, nephews, and family friends that were dear to her heart. All services will be private. Memorial contributions may be made in Fay's memory to Southern Delaware Roller Derby at https://sites.google.com/view/sodelrollerderby or checks can be made out to Southern Delaware Roller Derby and mailed to the family. Please sign the virtual guestbook located on the tribute page.

Edna Fay Shufelt, known as Fay, age 78 of Bridgeville, DE, passed away on Tuesday, December 07, 2021, at home surrounded by her loving family. She was born on March 22, 1943, in Wilmington, DE, daughter of the late Marshall T. and Hilda S. (Frampton)... View Obituary & Service Information

The family of Edna Fay Shufelt created this Life Tributes page to make it easy to share your memories.

Send flowers to the Shufelt family.