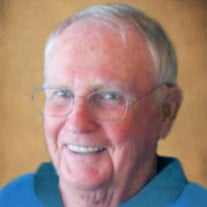 George Edward Wyatt Jr. “Sonny - Ed”, age 83 of Rehoboth Beach, DE, passed away on Saturday, January 9, 2021 surrounded by his wife and children. He was born on February 2, 1937 in Lewes, DE, son of the late George Edward, Sr. and Edna Wyatt. Ed was a family man and a great friend who meant a lot to everyone who knew him. He touched many lives throughout his life and his memory will live forever in the hearts of those who loved him. Ed graduated from Lewes High School in 1955, where he was the class president. He proudly served with the Pilot Association for the Bay and River Delaware for 44 years. In addition to his career as a river pilot, Ed was involved for many years in various Boy Scout activities. He was an Eagle Scout himself, later became a Scout Master, and spent many nights camping with his troop locally and all the way to National Jamboree. Ed enjoyed his woodworking projects which often involved his children and grandchildren. He has created many items which are enjoyed by various family members. After his retirement, Ed was actively involved in the community serving on many committees over the years, such as the Cape Henlopen High School Legends Stadium Monument Committee. He was a member of the Lewes Yacht Club for 50 plus years. Ed was most proud of his family and was the happiest when he was able to spend time on Lewes beach each summer with them. He will be eternally missed by his family as well as many friends. In addition to his parents, Ed was preceded in death by his sister Peggy. He is survived by his wife of 62 years, Jane; his children: Tim (Marie), Susan (Michael), and Terry (Brian); his grandchildren of whom he was extremely proud: Brian (Marie), Lindsay (Nick), Samantha (Bill), Caitlin (Joe), Tyler, and Andrew; his great grandchildren: Makenzie, Madelyn, Teagan, and Hayden; his siblings: Bonnie (Jack), Walt, Patty (Marvin), and Bill; his brother in-law Bob (Lynn); and his numerous nieces, nephews, cousins, and special family friend, Kathie. Due to the COVID-19 virus, a celebration of life will not be held at this time. In lieu of flowers, the family requests contributions in Ed’s memory to Beebe Medical Foundation in support of the Edna W. Wyatt Student Nurse Scholarship Endowment, 902 Savannah Road, Lewes, DE 19958. Please sign the online guestbook located on the tribute page.

The family of Ed Wyatt created this Life Tributes page to make it easy to share your memories.

Send flowers to the Wyatt family.