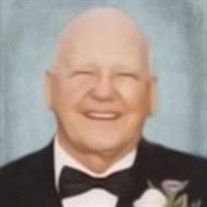 E. Dale Lutton, age 92, of Millsboro, DE, passed away at home, on Friday, August 13, 2021. He was born on October 08, 1928, in New Castle, PA, son of the late Joseph C. Lutton and Kathleen M. Stoops. Mr. Lutton earned a bachelor’s degree in business at William & Mary College in Williamsburg, Virginia. He was a proud veteran, having honorably served 2 tours in the US Army. On August 17, 2002, he married Mrs. Florence Lutton. Mr. Lutton worked as an accountant for Arthur Andersen, Johnson & Johnson, Philip A. Hunt Chemical Corporation, and New Jersey Transit. At Hunt Chemical, he rose to the level of Corporate Controller and Treasurer. In his spare time, Mr. Lutton could often be found doing jigsaw, sudoku and crossword puzzles or reading. He also enjoyed watching professional sports and lunches with his buddies. Mr. Lutton was a church elder and was a member of the choir as well. Above all, he enjoyed spending time with those he held most dear. Mr. Lutton was a loving and devoted husband, father, grandfather, and friend. He was loved by many, and he will be deeply missed by all who knew him. In addition to his parents, Mr. Lutton was predeceased by his first wife, Jean Elizabeth Lutton, who passed away in 2000, and his step granddaughter, Kimberly Van Marel. He is survived by his beloved wife of 20 years, Florence Lutton of Millsboro, DE; his son, Paul Lutton and daughter - in - law Jennifer Lutton of Langhorne, PA; his granddaughter, Devyn Lutton of Philadelphia, PA; his grandson, Dylan Lutton of South Bend, IN; his step daughters: Nancy Koby of Feasterville, PA, Donna Jagiela of Furlong, PA; his step granddaughters : Adrienne Harley of Newton, PA, Tanya Tressel of Oakford, PA; his step great granddaughter, Madison Harley of Newton, PA; his brother Gerald C. Lutton of Hurst, Texas and sister-in-law Dottie Lutton also of Hurst Texas. A memorial service will take place on Saturday, September 11, 2021 at 11:00 AM, at East Gate Presbyterian Church, 34806 Church Ln, Millsboro, DE 19966. Please sign the virtual guestbook located on the tribute page.

The family of E. Dale Lutton created this Life Tributes page to make it easy to share your memories.

Send flowers to the Lutton family.