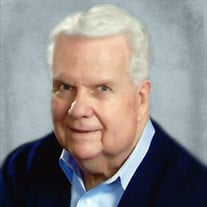 Dr. Douglas Graham Trout , age 88 of Lewes, DE, passed away peacefully on Wednesday, February 26, 2020. He was born on March 10, 1931 in Detroit, MI, son of the late Donald L. and Janette H. (Whiteman) Trout. Doug spent his early years in Detroit and Rockford, Illinois where he and his brother sold tickets to neighbors to allow them to watch each other wrestle and stand on each other’s stomachs. He graduated in 1952 from DePauw University in Greencastle, Indiana where he was a member of Lambda Chi Alpha Fraternity, the Alpha Phi Omega service fraternity, and many singing groups. He majored in geology and minored in psychology, noting that he wanted to know more about people who had rocks in their heads. He would later attend McCormick Seminary and Michigan State University where he received his Masters of Divinity and Ph.D. in Higher Education Administration, respectively. Doug spent two years in the Army where a position as chaplain’s assistant led him to a rewarding early career as a Presbyterian pastor in Marshall, Michigan. In 1965, at age 34, Doug became President of Tusculum College in Greeneville, Tennessee, making him one of the country’s youngest college presidents. He would ultimately create a consulting practice focusing on liberal arts colleges, historically black colleges and universities, and international education. He knew how to help organizations make their case, and his fundraising career led him to special relationships with DePauw, American University, the National Symphony Orchestra, St. George’s College Jerusalem, and other non-profit organizations. A lover of music his entire life, particularly Frank Sinatra, Etta James, and the Four Freshmen, Doug kept a conductor’s baton next to his chair for frequent moments of inspiration. He loved dogs (not cats) and children (especially babies), tools, and hardware stores. He bragged openly and often about his children and their accomplishments, particularly in their adult lives. He enjoyed interacting with people and could charm the pants off of nearly anyone around him. He also loved ice cream as much as life itself. Doug was an eternal optimist and dreamer. He was empathetic and loved serving as a counselor to those in need, or being asked to preach or teach. He treated all people with dignity and much of his life’s work was spent focused on those less fortunate and too-often forgotten. He was a proud Boy Scout and Army Corporal who believed in old-fashioned manners and meticulous grooming. Doug had the great fortune to be married late in life to Adele Hudson of Lewes, DE, who became an adored member of Doug's family. The measure of their love for each other and her devotion to him cannot be overstated. He was a loving and devoted husband, father, grandfather, and friend who will be deeply and genuinely missed by everyone who had the opportunity to know him. In addition to his parents, Doug was preceded in death by his son, David Trout; and his brother, Rod Trout. He is survived by his beloved wife, Adele of Lewes, DE; his children: Debbie Moran (Larry) of Minneapolis, MN, Cindy Trout of Kalamazoo, MI, Karen Trout of Kalamazoo, MI, Doug Trout (Kelly) of Charlottesville, VA, Lindsay Trout (Cheryl Guarna) of Purcelville, VA, and Steven Trout (Allison) of Wynnewood, PA; his daughter-in-law, Lori Trout; his grandchildren: Emily Moran (Jason Bessey), David Moran (Erica), Grace Santamaria, Joe Santamaria, Andy Santamaria, William Trout, Carter Trout, Alexander Trout, Leo Trout, Emerson Trout, and Harper Trout. Doug was unapologetic about his romantic nature and the family is proud to pay loving tribute to Judy Kirsch Van Solkema, the mother of Debbie, David, Cindy, and Karen; Sally McKeown, the mother of Doug, Lindsay, and Steven; Maureen Fostrey, and Jean Foerster Potts. A celebration of Doug's life will be held at a later date. Arrangements are being handled by Parsell Funeral Homes and Crematorium, Atkins-Lodge Chapel, Lewes, DE. In lieu of flowers, the family requests contributions in Doug's memory to Operation Crossroads Africa: 34 Mount Morris Park West #1 New York, NY 10027, or www.operationcrossroadsafrica.org/donate. Please sign the online guestbook located on the tribute page.

The family of Douglas Graham Trout created this Life Tributes page to make it easy to share your memories.

Send flowers to the Trout family.