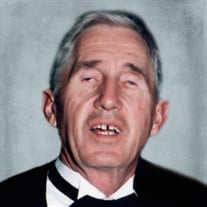 Florist Note- Please deliver any floral arrangements to the Lewes Funeral Home on Wednesday Sept. 16, 2020 by 2 PM. All are invited to participate via live-stream Thursday September 17th at 2:00PM. View the live-stream of Donald's services by clicking the following link: https://webcasts.lifetributes.com/1090056 Donald E. Anderson, age 93, of Lewes, DE, passed away on Thursday, September 10, 2020, at home surrounded by his family. He was born October 6, 1926, in Baltimore, MD, but it was the Northern Neck of Virginia that was his home. The son of the late Herman DeShields and Gertrude Jones Anderson, Donald followed in his father’s footsteps of a life on the water. Donald was a patriot and loved this country. When WWII broke out, he begged his parents to sign for him to join the Navy at the age of 17. They did and he soon found himself on a ship in the South Pacific fighting for his country. After the bombs were dropped in Japan, his ship was sent to Okinawa and Hiroshima. He was very proud of his military service and he lived his life with a great respect for the flag and what it represents. After the war, Donald worked in the Menhaden Fishing Industry as a Marine Engineer. It was the menhaden that brought him to Lewes where he met the love of his life, Betty, his wife of 64 years. When the fishing dried up, he moved onto tugboats and achieved the rank of Chief Engineer for the Interstate Oil Transport Company, a job which allowed him to travel to many waterways all up and down the East Coast. One day he remarked that in 24 hours, he drove over the Chesapeake Bay Bridge, flew in a plane over the same bridge and then powered a tugboat under it! All of these adventures on the sea made for rich stories that Donald loved to share. His talent for storytelling was unique and for those that knew him soon realized that amidst the humor were important life lessons for both children and adults alike. Tales of Captain Russell and rotten fish nets or Captain Kenneth and overloaded decks of fish were among his favorites. They were all of our favorites, too. In 1976, Donald was in the prime of his tugboat career, but life had other plans for him. He lost his sight. When the doctors told him, he would never see again, he answered them, “Well, if that is how it’s going to be, I have an awful lot to do!” And that is exactly how he lived the rest of his life. He was the strength and pillar of his family, including home maintenance, cutting the grass, feeding the horses, cooking meals, cleaning house, assisting Betty with her busy real estate business, and parenting two daughters (a sixth grader and college freshman). He was the glue that held everyone together. He was always the first one to rise in the morning drinking a hot cup of black coffee. In the evenings, he would sit at the kitchen table listening to the Phillies baseball game. Talk radio, news, and weather reports were his favorites. History was his passion and he could recite entire Presidential speeches from memory. He could also remember how much he paid for his first car and the price of gas to fill the tank. He knew every bump in the roads all over town, so if you took him for a drive he would always know where he was. He was a member of the Bethel United Methodist Church, the Jefferson Masonic Lodge #15, where he was an instructor, and the Unity Chapter #16 Order of the Eastern Star. Donald was a generous, kind man with the highest integrity. He was always willing to help others by giving his time and support. If you had a problem, he would listen and help. He spent a lot of time on the telephone! It was a joy to listen to his stories and laughter. So in the spirit of one of his favorite speeches by General Douglass MacArthur in his farewell speech to Congress in 1951, “Old soldiers never die, they just fade away.” He is survived by his beloved wife Elizabeth M. Anderson “Betty”, two daughters, Charlotte Brown and Janice Ferneyhough, both of Milton; two grandchildren, James Goss Ferneyhough IV of Newark, DE and Samantha Grace Tanner of Milton, DE; a sister Catherine Smith of Concord, North Carolina. Funeral Services will be held on Thursday Sept. 17, 2020 at 2 PM at the Parsell Funeral Homes & Crematorium, 16961 Kings Highway, Lewes, DE. with burial at Bethel Methodist Cemetery, Lewes, DE A viewing will be held on Wednesday, Sept. 16, 2020 from 5 - 7 PM at the funeral home. All are invited to participate via live-stream Thursday September 17th at 2:00PM. View the live-stream of Donald's services by clicking the following link: https://webcasts.lifetributes.com/1090056 Due to the ongoing COVID-19 pandemic, social distancing protocols must be observed, and masks must be worn by everyone participating in any aspect of the services. Memorial contributions may be made to Bethel United Methodist Church, Attn: Bldg. Fund, 129 W. 4th Street, Lewes, DE 19958, or to Delaware Hospice, 100 Patriots Way, Milford, DE 19963, or to Meals on Wheels www.cheerde.com/meals-wheels. Please sign his online guest book at this site.

Florist Note- Please deliver any floral arrangements to the Lewes Funeral Home on Wednesday Sept. 16, 2020 by 2 PM. All are invited to participate via live-stream Thursday September 17th at 2:00PM. View the live-stream of Donald's services... View Obituary & Service Information

Florist Note- Please deliver any floral arrangements to the Lewes...

Send flowers to the Anderson family.