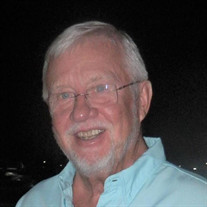 David Frederick Powers, age 77 of Lewes, DE, formerly of Severna Park, MD, passed away on Friday, December 25, 2020, at Beebe Healthcare. He was born on August 15, 1943 in Freeport, IL, son of the late Gerald S. and Anna M. (Deuth) Powers. In 1965 Mr. Powers married the love of his life, Barbara Jean Powers (Gatz) in Oregon, IL, and they shared 55 adventurous and wonderful years together. He built a lifelong career as a senior data systems analyst for the Department of Defense. Mr. Powers was particularly fond of travelling with his wife, family and friends, volunteering with his church and the community, reading, biking, and all sports. Above all, he cherished time spent with friends and family, especially his grandchildren. Mr. Powers was a loving and devoted husband, father, grandfather, and friend who will be deeply missed by all who knew him. In addition to his parents, Mr. Powers was preceded in death by his sister, Martha. He is survived by his wife, Barbara (Gatz) Powers of Lewes, DE; his sons: Christopher Powers (Stefanie) of Silver Spring, MD; and Jonathan Powers (Amy) of Laurens, NY; his grandchildren: David and Dylan of Silver Spring, MD and Carter and Jackson of Laurens, NY; his brother, Michael Powers (Sallie) of Reston, VA; his aunt, Marge Powers of Mount Morris, IL; his brother-in-law, Ron Gatz (Gini) of Hot Spring Village, AR; and many nieces, nephews, cousins, and dear friends. Due to the ongoing COVID-19 pandemic, a memorial service to celebrate his life and honor Mr. Powers’ memory will be planned at a later date when it is safe for family and friends. In lieu of flowers, the family suggests donations in Mr. Powers’ memory to the Grace of God Lutheran Church, www.goglcde.org PO Box 1251 Millsboro, DE 19966, or the American Heart Association, www.heart.org. Please sign the online guestbook located on the tribute page.

The family of David F. Powers created this Life Tributes page to make it easy to share your memories.

Send flowers to the Powers family.