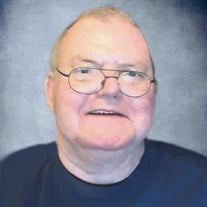 David L. McClain Sr., age 79 of Milton, DE, passed away on Saturday, April 18, 2020 at his residence in Milton, DE. He was born on April 7, 1941 in Dundee, NY, son of the late Robert and Alberta (Cornish) McClain. Mr. McClain was an avid outdoorsman who especially enjoyed hunting and fishing. He cherished time spent with those he held most dear. Mr. McClain was a loving and devoted husband, father, grandfather, great-grandfather, brother, and friend who will be deeply missed by all who knew him. In addition to his parents, Mr. McClain was preceded in death by his brothers: Carlton "Tink" McClain, Sr. and Thomas McClain. He is survived by his beloved wife, Bernice McClain of Milton, DE; his sons: Randy McClain of Oklahoma City, OK, Bryan McClain of Dundee, NY, and David McClain Jr. of Dundee, NY; his daughters: Bonnie Flores of Salinas, CA, Kelly McClain of Las Vegas, NV, and Lisa Buck of Benton, AR; his stepson, James Atkisson of Seminole, FL; his stepdaughters: Mary Walker of Winchester, NH and Amy Lee of Frisco, TX; his 16 grandchildren; his 21 great-grandchildren; his brother, Merrield "Mickey" McClain of Myrtle Beach, SC; and his sister, Melody Hartford of Lincolnton, NC. Due to the ongoing COVID-19 pandemic, services will be private. In lieu of flowers, the family requests contributions in Mr. McClain's memory to the National Kidney Foundation of Maryland and Delaware, Heaver Plaza, 1301 York Road, Suite 209, Lutherville, MD 21093-6007, or www.kidneymd.org. Please sign the online guestbook located on the tribute page.

The family of David L. McClain Sr. created this Life Tributes page to make it easy to share your memories.

Send flowers to the McClain family.