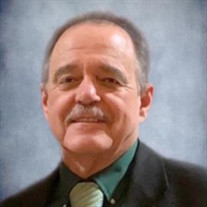 David Robert Howell, 68, passed away on Monday, April 26 at Penn Presbyterian Hospital in Philadelphia, after a valiant fight to recover from a heart attack. He was born in Milford, Delaware on February 25, 1953 to Harry and Evelyn (Miller) Howell. David graduated from Cape Henlopen High School in 1971 and studied accounting at the University of Delaware. He owned a button business in Georgetown, Delaware for over 30 years and was always met with lots of questions when he told people he sold buttons for a living. David was involved in the Georgetown Little League program for many years with his children Amber and Matt. He was an avid basketball and tennis player and enjoyed playing tennis with his kids, grandkids, and friends at the Plantations in Lewes. David also enjoyed ballroom dancing, after being talked into taking dance lessons by his wife. He belonged to the Twinkle Club dance club in Laurel and he and his wife often danced in the kitchen while cooking meals together. In retirement, David delivered meals for Meals-on-Wheels, and he was a tax preparer for AARP’s Tax-Aide Program. He also served on the Board of Directors for the Indian River Senior Center in Millsboro, where he made great friends shooting pool. David was a devoted husband, father, and grandfather and he experienced incredible joy getting to know each of his grandchildren. Hugi (10) called him most every day to talk about basketball, Oliver (9) was excited to learn how to fish and build things with Pop-pop, and Ali (7), whom he called Sunshine, loved reading to him and telling him jokes. Aree (4) loved assisting with and especially eating Pop-pop’s famous French toast. And he and Aran (2) shared many fits of uncontrollable laughter at Pop-pop’s crazy funny faces. David is survived by his loving wife of 46 years, Joanne (Fisher) Howell; his daughter, Amber Herrera and son-in-law Victor, his son, Matthew Howell and daughter-in-law June; his five grandchildren: Hugi, Oliver, Ali, Aree, and Aran; his older brother, Bruce Howell and sister-in-law Bonnie; his brother-in-law Theodore Jones; his sister-in-law Wanda Howell; and numerous nieces and nephews. A special family gathering will be held at his home. Interment will be private. Condolences may be sent to Mrs. Joanne Howell, c/o Parsell Funeral Homes, Atkins-Lodge Chapel, 16961 Kings Highway, Lewes, DE 19958. Contributions in David’s memory may be made to Meals-on-Wheels, 32409 Lewes Georgetown Highway, Lewes, DE 19958.

David Robert Howell, 68, passed away on Monday, April 26 at Penn Presbyterian Hospital in Philadelphia, after a valiant fight to recover from a heart attack. He was born in Milford, Delaware on February 25, 1953 to Harry and Evelyn (Miller)... View Obituary & Service Information

The family of David R. Howell created this Life Tributes page to make it easy to share your memories.

Send flowers to the Howell family.