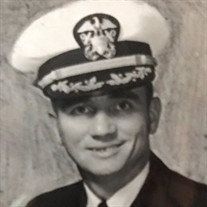 David W. Bradley, Jr., 88, of Rehoboth Beach, Delaware, passed away peacefully on January 15, 2020, after a long battle with Alzheimer’s Disease. He was born on New Year’s Day, 1932, to David W. and Grace (Wheeler) Bradley, in Greensboro, North Carolina. After David graduated from Princeton University in 1954 with a B.A. in Economics, summa cum laude, he proudly served 22 years in the United States Navy, retiring with the rank of Commander. His naval career included duties as a NROTC instructor at Auburn University, a P5 Marlin pilot over the waters off Japan, and CIC officer on the aircraft carrier USS America during the Vietnam War. After leaving the Navy, David worked for RCA and General Electric in New Jersey, helping to develop the Aegis Combat System. A lifelong student, he earned Master’s degrees in Computer Science and Business Administration; he completed a Law degree from Rutgers University and passed the Bar exam at the age of 52. David was an avid Bridge player, and was on the championship team from Princeton at the National Collegiate Duplicate Bridge tournament; he also taught Bridge in Rehoboth Beach in his later years. David loved playing golf, and won many tournaments at the Kings Creek Country Club where he and his wife, Antoinette, moved in 1995. David was a humble, quiet and unassuming man, with a keen intellect and love of learning, as evidenced by his membership in the Mensa society. He was comfortable in any social setting: each person he met found David to be an interesting, engaging conversationalist. David is survived by his loving wife of 30 years, Antoinette; his 4 children: David W. “Ward” Bradley, III (wife Brenda) of Tallahassee FL, Tracey Bradley of Arlington VA, Robert Bradley (wife Dana) of Marlton NJ, and Heather Cote of Chocorua NH; 6 grandchildren; and 3 great-grandchildren. David will be interred at Arlington National Cemetery at a future date. He would have wished for any memorial donations to be made to Alzheimer’s Disease research. Please sign David’s online guestbook located on this site.

The family of David W. Bradley created this Life Tributes page to make it easy to share your memories.

Send flowers to the Bradley family.