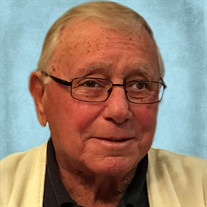 Daniel H. Marrama, age 86, of Greenwood, DE passed away on Monday, August 12, 2019, at the Country Rest Home, in Greenwood, DE. He was born on May 14, 1933 in Revere, MA, son of the late Daniel Henry Marrama and Marie V. (D'Alissandro) Marrama. Mr. Marrama graduated from Hyde Park High School in Boston, MA, Class of 1951. He received his Associates Degree from Cape Cod Community College. Mr. Marrama proudly served in the United States Army during the Korean Conflict. He worked various jobs throughout his career including a youth counselor for the Archdiocese of Philadelphia, Bartending in Cape Cod, MA and Palm Beach, FL, and a converter for Natural Gas Co. Most recently he was a Veterans Representative with the Commonwealth of Pennsylvania, from which he retired. In his spare time, Mr. Marrama enjoyed golfing, swimming, and reading. He looked forward to traveling to Florida in the winter for the past 20 years to enjoy the sunshine. In addition to his parents, Mr. Marrama was preceded in death by his brother, Sonny Marrama and his sister, Josephine Fletcher. He is survived by his wife, Helen Hill Marrama; two step children: Michael Millard and Melinda Millard; two grandchildren: Koby Stitzel and Eve Amaturo; and many nieces and nephews. A Celebration of Mr. Marrama's life and luncheon will be held on Wednesday, August 28, 2019 from 11:00 AM to 2:00 PM at the Lutheran Church of Our Savior, 20276 Bay Vista Road, Rehoboth Beach, DE 19971. In lieu of flowers, memorial contributions may be made in Mr. Marrama's name to Delaware Hospice, 100 Patriots Way, Milford, DE 19963. Please sign Mr. Marrama's online guest book located on this site. FLORIST NOTE: PLEASE HAVE ALL FLORAL ARRANGEMENTS DELIVERED TO THE LUTHERAN CHURCH OF OUR SAVIOR BY 10:30 AM ON AUGUST 28.

The family of Daniel Henry Marrama created this Life Tributes page to make it easy to share your memories.

Send flowers to the Marrama family.