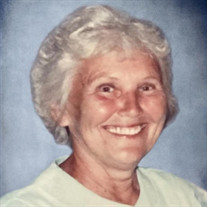 Clara J. Hertzog, beloved wife, mother and grandmother went to be with her Lord on Sunday, January 23, 2022, at the age of 97. She is now reunited with the love of her life, Burton Hertzog, whom she missed terribly since his passing nearly 20 years ago. Born in a small house on Old Elm Street in Conshohocken, PA on September 13, 1924, Clara was one of nine children of Stanley and Anna Pupek, Polish immigrants who succeeded at the dream of working hard and raising a first generation of Americans. After high school, Clara worked in a bomb factory for six months as a “Rosie the Riveter,” one of the iconic women who produced munitions and supplies for the war effort. She joined the United States Cadet Nurse Corps, graduated Montgomery Hospital nursing school class of 1946, and worked as a Registered Nurse for several years. Clara met Burton Hertzog, and soon they were married in January 1948, two and half years after the end of WWII. They started having children, and then had more children. They raised their six boys and four girls in Norristown, PA, and attended St. Francis of Assisi parish. Clara stopped working full-time, but her nursing skills came in handy to care for her growing family, as well as neighborhood kids stopping by with minor injuries. In 1974, Clara returned to full-time work at the Norristown State Hospital providing treatment for patients with mental illness. In 1984 Clara and Burt retired to “slower” Delaware and enjoyed many years of fishing and boating and visits from their children and grandchildren. Several of their children eventually moved to Delaware, and those who didn’t visited frequently. To her last breath, Clara’s life revolved around her 10 children, 26 grandchildren and 42 great-grandchildren. Because of the dedication of her children and their spouses, Clara was able to grow old in her own home in Lewes. Clara is preceded in death by her husband Burton D. Hertzog, their daughter Anna who passed away at birth, her parents and seven siblings, and her granddaughter Jackie Rogers. Clara is survived by her children: Joan (William) Tucker; David (Louise) Hertzog; Diane (Michael) Rogers; Mark (Kathleen) Hertzog; Eric (Richelle) Hertzog; Joseph (Yong Cho) Hertzog; Jeffrey (Amelia) Hertzog; Nancy (Charles) Wright; Paul Hertzog (Laura Manges); and Gail Field (Thomas Pettine); and 26 grandchildren and 42 great-grandchildren. Family and friends are invited to the visitation February 3, 2022, 10:00-11:00 AM, at St. Jude The Apostle Catholic Church in Lewes, Delaware, followed by a funeral mass at 11:00 AM. In lieu of flowers, contributions may be made to St. Jude Children’s Research Hospital www.stjude.org , one of Clara’s favorite charities. Please sign the virtual guestbook located on the tribute page.

Clara J. Hertzog, beloved wife, mother and grandmother went to be with her Lord on Sunday, January 23, 2022, at the age of 97. She is now reunited with the love of her life, Burton Hertzog, whom she missed terribly since his passing nearly... View Obituary & Service Information

The family of Clara Joan Hertzog created this Life Tributes page to make it easy to share your memories.

Send flowers to the Hertzog family.