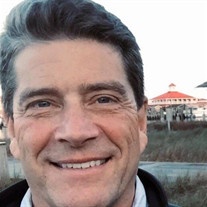 Dr. Christopher Kemp Sommerfield, age 55 of Lewes, DE, passed away on Sunday, December 29, 2019. He was born on October 14, 1964 in Bryn Mawr, PA, son of Beverly (DeCurtis) and the late Earle (Kip) Sommerfield. Dr. Chris Sommerfield built his professional career at the University of Delaware starting in 2000 after receiving his doctorate at the Stony Brook University and finishing a Postdoctoral Scholarship at the U.S. Geological Survey and Woods Hole Oceanographic Institution. Dr. Sommerfield’s expertise was focused on coastal geological processes on the continental shelf, and in estuaries and tidal wetlands. He was keenly interested in the impacts of humans in estuaries and how these impacts address questions of ecosystem sustainability. His work importantly looked at the natural processes governing the thickness of marsh soils and the ability of these environments to take up atmospheric carbon. His findings are critical to the State of Delaware where almost a quarter of the State is tidal wetlands, and where global sea level rise is disproportionately impacting the Mid-Atlantic region. He recently co-authored an important report for the State of Delaware on planning scenarios for sea level rise. Dr. Sommerfield was a highly productive scientist with 55 publications and over 2,700 individual citations of his work. In recent recognition of his work, Dr. Sommerfield was the 2019 recipient of the Pritchard Award, which recognizes the author(s) of the best physical oceanography paper published in the respected journal Estuaries and Coasts within the past two years. He was an active member in five professional societies, contributed his knowledge at the federal, state and local levels of government, and actively served at all levels within the University of Delaware. In addition to the lasting legacy of Dr. Sommerfield’s scientific research, perhaps his greatest professional contribution, and one that he would be most proud of, would be the hundreds of students he taught in the classroom and in the field, and the 15 graduate students he mentored. Although rigorous, he was thoughtful and caring, and was always earned the respect of his students. Chris was a highly valued colleague and friend of the faculty and staff of the University and will be profoundly missed. Chris was a devoted son, father and husband who loved sharing his passion for the water through scuba diving and his love of guitar and music with his boys. His sense of honor and discipline to his work and family and his ability to see the good in everyone he met will forever serve as an inspiration to his children, family, friends, and colleagues. In addition to his father, Chris was preceded in death by his grandparents: Earle and Larue Sommerfield and Alfred and Elizabeth De Curtis. He is survived by his beloved family: his wife, Beth; his children: Davis, Richard, and John; his mother, Beverly; his brother, Jeff (Christina); his sister, Jennifer; and his many nieces, nephews, aunts, uncles, and cousins. UPDATE: The Celebration of Life scheduled for March 21, 2020 at Barnaby's, 15 South High Street, West Chester, PA has been CANCELLED and will be RESCHEDULED at a later date. Please check back periodically on this tribute page for rescheduling information. Interment will be private. Please sign the online guestbook located on the tribute page.

The family of Christopher Kemp Sommerfield created this Life Tributes page to make it easy to share your memories.

Send flowers to the Sommerfield family.