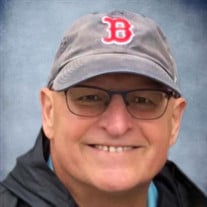 Christopher Mario Pallotta, age 64 of Lewes, DE, passed away Saturday, March 6, 2021, surrounded by family. He was born in Boston, MA on June 25, son of Gilda (Ciccone) Pallotta and the late Angelo "Ralph" Pallotta. Chris was raised in Natick, MA before graduating from Natick High School in 1974. Chris was a 3 sports letterman for the Natick High School Redmen, where he shared the fields with his older brothers, Peter, Tom, and Larry. He began his professional career with a startup computer company, Digital Equipment Corporation, that later became Hewlett Packard (HP,) where he spent most of his career in federal government sales. Working on his cars and homes brought him great joy, but his greatest passion was his family. Chris loved visits to Natick, MA, in particular visits to Casey's Diner for an "all-around" dog or driving on the beach for sunset, throwing a line in the water, and firing up the grill with those dear to him. When vacationing on Cape Cod, he could be found nightly at Sundae School savoring his favorite blueberry sundae with black raspberry ice cream. As his daughters grew and moved to different parts of the globe, big family vacations abroad and exploring the world became a treasured activity. Chris was a gentle and genuine soul with great compassion, integrity, selflessness, and was a little bit of a jokester; we all should embrace his qualities. When trying to make a decision, always ask yourself, "What would Chris Pallotta do?". Chris will be deeply missed by his family and friends. In addition to his father, Chris was preceded in death by his brothers: Peter and Larry Pallotta. He is survived by his beloved wife of 40 years, Patricia Ann (Cardellicchio) Pallotta; his daughters: Marie Pallotta (Andrew Byrne) of Liverpool, England and Beth Pallotta (Kyle Tsukamoto); his grandchildren: Tiger and Talynn, of Kailua Kona, Hawaii; his mother, Gilda Pallotta; his brother, Tom Pallotta; his sisters: Donna Wolf and Nicole Lathrop; as well as a loving extended family. A private service was held in Lewes, DE. In lieu of flowers, the family suggests donations be made to your local food bank. Please sign the virtual guestbook located on the tribute page.

The family of Christopher Mario Pallotta created this Life Tributes page to make it easy to share your memories.

Send flowers to the Pallotta family.