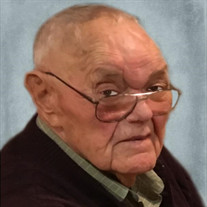 FLORIST NOTE: PLEASE HAVE ALL FLORAL ARRANGEMENTS DELIVERED BY 3 PM, WEDNESDAY, JULY 31, 2019 TO PARSELL FUNERAL HOMES, LEWES, DE. Charles R. Taylor, age 94, of Millsboro, DE, formerly of Riderwood, MD, passed away on Thursday, July 25, 2019 at Delaware Hospice Center in Milford, DE. He was born on Wednesday, May 13, 1925 in Monkton, MD, son of the late Charles and Grace (McCoy) Taylor. Mr. Taylor worked for the United States Postal Service and was appointed Postmaster of the Riderwood (MD) Post Office by John F. Kennedy in 1962. He retired in 1989. Mr. Taylor was an active member of Hunt’s Memorial United Methodist Church in Towson, MD, and more recently, a member of Grace United Methodist Church in Millsboro, DE. He and his wife, Julia, volunteered with Meals on Wheels and enjoyed making the deliveries together. Mr. Taylor was an avid gardener and loved traveling and camping, via the family RV. A loyal fan of the Baltimore Colts and Orioles, Mr. Taylor enjoyed watching football and baseball whenever he could. In addition to his parents, Mr. Taylor was preceded in death by his wife of 38 years, Julia; his son, Russell; his four sisters: Catherine Amos, Edna Noppenberger, Estella Foster and Irene Smith; his three brothers: Kenneth Taylor, Robert Taylor, and Ralph Taylor; and a sister and brother who died in infancy. He is survived by his daughter, Mary Lou Scoone of Riderwood, MD; a nephew, William A. Musgrove, Jr. and his wife, Shawn of Lewes, DE; two great-nieces, Emily and Kaitlyn; and numerous nieces, nephews, cousins and dear friends. Funeral services will be held on Thursday, August 1, 2019, at 11:00 AM, at Grace United Methodist Church, 300 East Church Street, Millsboro, DE 19966. Friends may call beginning at 10:00 AM. Interment will be private. In Lieu of flowers, memorial contributions may be made in Mr. Taylor's memory to Grace United Methodist Church at the above address or to Hunt’s Memorial UMC, 1912 Old Court Road, Towson, MD 21204.

The family of Charles R. Taylor created this Life Tributes page to make it easy to share your memories.

Send flowers to the Taylor family.