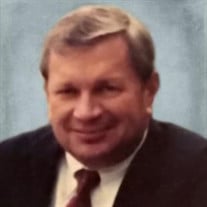 Charles Wilson Given, Jr. died on March 5, 2020, at the Gardens in Virginia Beach, VA. He was 83. Mr. Given was born on May 18, 1936 in Oak Park, IL to Charles Wilson Given and Phyllis Bruns. He graduated from Princeton University in 1959 with a Bachelor of Science in Chemical Engineering, and then served as an ensign in the Navy in Norfolk and Chesapeake, VA until 1962. He married Cynthia Raught on August 13, 1960 in the chapel at Duke University. Charles and Cynthia began their married life in Norfolk, VA, then eventually moved to Houston, TX. From there, they moved to Cincinnati, OH where their children were born and where he earned his Masters in Business Administration from the University of Cincinnati. Charles and Cynthia then moved to Northbrook, IL in 1970 when Charles began working for the Stepan Company in Northfield, IL. Charles and Cynthia moved to Lake Forest, IL in 1975, where they lived until Charles retired in 1999 and they moved to Williamsburg, VA. In later years, they had transitioned into assisted living, and have lived for the past seven years at The Gardens of Virginia Beach in Virginia Beach, VA. Charles was an avid golfer who maintained a single-digit handicap for much of his playing career; he also gave his love of the game to his son. Charles also was a lifelong fan of the Green Bay Packers and, after everyone in his immediate family had attended Duke University at one point in their lives, he was a strong supporter of the Duke Blue Devils, particularly the basketball team. Charles is survived by his daughter, Anne Whitney Raught Given; his son, Jeffrey Scott Given; and his grandson, Connor Benedict Given. Charles was preceded in death by his wife, Cynthia, who passed away on May 26, 2019. Charles will be buried in a private ceremony on March 14, 2020 at Saint Peter’s Episcopal Church in Lewes, DE. Please sign Mr. Given's online guestbook located on this site. FLORIST NOTE: PLEASE HAVE ALL FLORAL ARRANGEMENTS DELIVERED BY 10 AM TO PARSELL FUNERAL HOMES LEWES LOCATION ON SATURDAY, MARCH 14, 2020.

Charles Wilson Given, Jr. died on March 5, 2020, at the Gardens in Virginia Beach, VA. He was 83. Mr. Given was born on May 18, 1936 in Oak Park, IL to Charles Wilson Given and Phyllis Bruns. He graduated from Princeton University in 1959... View Obituary & Service Information

The family of Charles W. Given Jr. created this Life Tributes page to make it easy to share your memories.

Send flowers to the Given family.