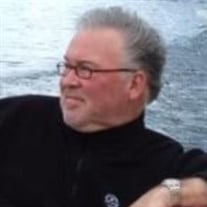 Carl Spalding Gates, Jr., 62, a Lewes-based attorney and investment advisor, died at home on May 23, 2020, surrounded by family, after a brief, brutal struggle with pancreatic cancer. Gates, known since childhood as “Chip,” was an accomplished engineer, attorney and investment counselor. After graduating from Worcester Polytechnic Institute with Bachelor of Science degrees in both mechanical and management engineering, he began his career in 1980 at the DuPont Co. He later worked at AIG in Wilmington before leaving to earn a law degree from Widener Law School. He founded his own law firm, Gates and Associates, in Chadds Ford, PA, and later worked as a vice president at Fifth Third Bank in Evansville, IN, followed by stints at KPMG in Scottsdale, AZ, and Grant Thornton in McLean, VA. He established his own investment firm, Wealth Capital Investors, after moving to Lewes in 2009. A gifted athlete and enthusiastic traveler, Gates was a 1975 graduate of Wilmington Friends School, where he met his future wife, Gretchen Helmbreck, to whom he was married for more than 40 years. They lived for over a decade in Centreville and later Chadds Ford, PA. Known by family and friends for his infectious laugh, optimism and wry sense of humor, Gates frequently hosted family and friends at the couple’s home and the two Lewes restaurants he co-owned with his son, The Buttery and Bushi Sushi. A longtime member of Wilmington Country Club, he also enjoyed golf, biking and surf fishing (although no one remembers him ever catching an actual fish.) In addition to his wife, Gates is survived by three sons, Carl S. III, Wilson C., and Taylor M. (Tina); his parents, Carl S. Gates Sr. and Carolyn Fay Gates of Jennersville, PA; his brothers David (Kathleen), Scott (Stephanie) and a sister, Carolyn Connors (Sean); two grandchildren and a host of nieces, nephews and cousins along with two sisters-in-law and two brothers-in-law. Services and burial will be private. In lieu of flowers, the family suggests donations to the Pancreatic Cancer Action Network, 1500 Rosecrans Ave., Ste. 200, Manhattan Beach, CA 90266, https://www.pancan.org/ Please sign Mr. Gates's online guest book located on the tribute page on this site.

Carl Spalding Gates, Jr., 62, a Lewes-based attorney and investment advisor, died at home on May 23, 2020, surrounded by family, after a brief, brutal struggle with pancreatic cancer. Gates, known since childhood as &#8220;Chip,&#8221; was... View Obituary & Service Information

The family of Carl Spalding Gates Jr. created this Life Tributes page to make it easy to share your memories.

Send flowers to the Gates family.