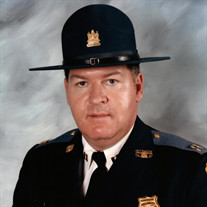 SERVICES FOR CAPTAIN RILEY HAVE BEEN SCHEDULED AS FOLLOWS- LIVE STREAM OF SERVICES MAY BE VIEWED AT https://youtu.be/9TbkA3n12ys FLORIST NOTE- ALL FLOWERS ARE TO BE DELIVERED TO THE LEWES FUNERAL HOME BY 3 PM FRIDAY OCTOBER 23, 2020. FUNERAL SERVICES WITH FULL STATE POLICE HONORS WILL BE HELD ON OCTOBER 24, 2020 AT 2 PM AT THE BETHEL UNITED METHODIST CHURCH, W 4TH STREET, LEWES, DE WITH VISITATION BEGINNING AT 12:30 PM IN THE CHURCH. ENTOMBMENT WITH STATE POLICE AND MILITARY HONORS WILL FOLLOW THE SERVICES AT BETHEL METHODIST MAUSOLEUM IN LEWES. Due to the ongoing COVID-19 pandemic, social distancing protocols must be observed, and masks must be worn by everyone participating in any aspect of the services. Captain Allen Eugene Riley, DSP ret., age 73, of Lewes, Delaware passed away peacefully in the arms of his family on April 26, 2020 at his residence. Mr. Riley was born in Wilmington, Delaware on May 2, 1946, son of the late Charles Eugene and Mary Elizabeth Reed Riley. Allen graduated from Seaford High School in 1964 and received his Bachelor of Science in criminal justice from the Wilmington college in 1978. Following his graduation from high school he entered the United States Army where he achieved the rank of E5 and served as helicopter Crew Chief. During his period of service, he received his Crewman Wings, the National Defense Service Medal and Good conduct medal. In 1968 he began his career with the Delaware State Police where he retired as Captain at Troop 7 in 1988. During his career he performed many assignments which included; Patrol and Criminal Units, Youth Division, Selective Enforcement, Detective, and many others. His duties included working at Troop 2A on Kirkwood Highway, Headquarters at Dover, Troop 5 Bridgeville, Troop 4 Georgetown and Troop 7 Lewes (Dewey Beach) where he retired. He received a commendation for job performance as well as the DSP Superintendent’s Citation for performance following the construction of the Troop 7 facility which was formerly located on Rt. 1 in Lewes. Following his retirement from the DE State Police he worked for the Delaware State Police Federal Credit Union from 1987 to 2002 when he again retired after holding the positions of Manager, President, and CEO. Unable to sit idle, he took a position in 2003 with Tidemark Federal Credit Union (formerly known as Sussex County Federal Credit Union) where he worked from June of 2003 until the present, serving at first in marketing and currently as Vice President of Operations until his passing. He had also served on the DSPFCU Board for many years and had held the position of Board President for six years. In 1996 he received Professional of the Year from the Delaware Credit Union League as well as the Dean’s List with highest honors from the National Credit Union Institute. Also, in 2001 he was named an inductee to the DTCC Alumni Walk of Success and was recognized by a Bronze Plaque in the brick walkway. His professional affiliations through the years included, the Delaware State Troopers’ Retired Association, past member of the Delaware School Board Association where he had served in the positions of treasurer, 1st Vice President and President Elect; the Wilmington College Alumni Association and the CUNA School Alumni Association. At the community level his dedication to faithfully serve his church included the Bethel United Methodist Church Board of Trustees where he recently had served as Board President; the United Methodist Men, Administrative Church Council, and the Church Emergency Preparedness Team. However, his devotion to his fellow man continued with his many memberships which included the Jefferson Masonic Lodge No. 15 A.F. & F.M., the Scottish Rite Consistory, Nur Temple, A.A.O.N.M.S., Lower Delaware Shield and Square Club where he was a Past President; the Cape Henlopen School Board where he served from 1979 to 1989 and had held the positions of Vice President and President; American Legion Post 28; the Credit Union Executive Society; the Henlopen Ruritan Club where he had served as President and Board Member; the Order of Redmen; and Ducks Unlimited where he had been a member since 1999. Allen is survived by his wife and soulmate of 35 years, Diana F. Riley; two sons Charles “Chuck” Riley (Patricia) and Mark Riley (Alicia Purdy); three Grandchildren, Chase Riley, Bethany Riley, & Luke Riley; a step-daughter, Deena Eskew (Brian “Hoss” Coddens); his brother Charles “Mouse” Riley (Stephanie); his sister, Cheryl Graves (The Honorable T. Henley Graves, retired); and three nephews, Mike Riley, Tyler Graves and Hunter Graves. In Lieu of flowers memorial contributions are suggested to: the Delaware State Police Museum, PO BOX 430, Dover, DE 19903; or to the Bethel United Methodist Church, 129 W. 4th Street, Lewes, DE 19958 Attn: the IT or Audio Visual Program; or to the Bethel Christian Pre-School, 129 W. 4th Street, Lewes, DE 19958. Please sign the online condolences below.

SERVICES FOR CAPTAIN RILEY HAVE BEEN SCHEDULED AS FOLLOWS- LIVE STREAM OF SERVICES MAY BE VIEWED AT https://youtu.be/9TbkA3n12ys FLORIST NOTE- ALL FLOWERS ARE TO BE DELIVERED TO THE LEWES FUNERAL HOME BY 3 PM FRIDAY OCTOBER 23, 2020. FUNERAL... View Obituary & Service Information

The family of Capt. Allen Eugene Riley, ret. DSP created this Life Tributes page to make it easy to share your memories.

SERVICES FOR CAPTAIN RILEY HAVE BEEN SCHEDULED AS FOLLOWS-