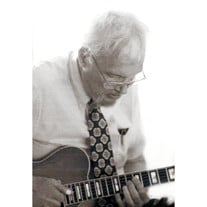 Music, family, and learning filled the life of Bruce Chappelle from his earliest days in Claymont and then Dover, Delaware. He was a proud graduate in the class of 1955 at Caesar Rodney High School and maintained connections with his classmates there for a lifetime. While in high school he discovered his life’s passion in playing, listening to, and learning instrumental music. He became an accomplished steel guitarist in high school and travelled Delmarva teaching at studios. His father still needed to take him to teach because he was too young for a driver’s license! Bruce went on to earn a B.S. degree from the University of Delaware. He returned to his Caesar Rodney to teach science at the request of the superintendent of schools. He was then to earn two Master’s degrees, one from the University of Delaware and the other from Cornell University. He taught at Caesar Rodney for six years before being recruited to teach Physics and Chemistry at Horace Greeley High School in Chappaqua, New York, where he was a respected and loved member of the science faculty for the next thirty years. Bruce moved to Chappaqua with his first wife, Christine T. Chappelle and sons Todd and Dale were born soon after. While his weekdays were filled with science, his weekends were filled with music. He played steel guitar with country bands, and jazz guitar and popular standards with various combos. One summer he played nightly at The Tavern on the Green in New York City. Each summer he also spent days at the beach in Fenwick Island with his extended family of parents, sisters, aunts, uncles, and cousins. In 1984 Bruce married Sherry Chappelle who survives him. Her two children, Jody and Jamie Leigh Ebert joined the family. After retirement, Bruce and Sherry moved to Rehoboth Beach where Bruce quickly became an integral part of the music scene. He performed in venues all over Delmarva, primarily with The Jazz Guys Trio. He also played bass, guitar, or steel guitar with Jeff Irwin at Victoria’s for many years, with the Jamboree band, the Delmarva Big Band, Clear Space Theater musical productions, and the legendary Art Curley to name a few. On Jazz Weekend, one of his favorite events was playing a solo brunch at the Back Porch. He produced a CD, When I Fall in Love, that became a favorite of many locals. He was a teacher for many years at B and B Music and had a number of private students as well. He sang bass with the a cappella group, Mixed Blessings, the Elder Moments at Osher, and the Moorings Chorus. The Chappelles relocated to the Moorings at Lewes in 2019. Bruce was predeceased by his parents, Palmer R., and Rachel V. (Taylor) Chappelle. Along with Sherry, he will be greatly missed by his beloved children, Todd (Anne), Dale (Davia Bugge), Jody (Mara), and Jamie Leigh. His grandkids, Jack and Echo Chappelle and Parker and Xander Ebert, will mourn the loss of the PopPop they adored. Maureen Wootten and Diane Mason have lost a great big brother and lifetime friend. He also leaves to mourn him nephews, cousins, classmates, students, and his entire musician “family”. Arrangements have been entrusted to Parsell Funeral Homes and Crematorium, Atkins-Lodge Chapel, Lewes, DE. A celebration of Bruce’s life will be held at a later date. Donations in his memory would be appreciated to the Food Bank of Delaware, 1040 Mattlind Way, Milford, DE, 19963 or Meals on Wheels Lewes-Rehoboth, 32409 Lewes Georgetown Highway, Lewes, DE, 19958. Please sign the online guestbook located on the tribute page.

Music, family, and learning filled the life of Bruce Chappelle from his earliest days in Claymont and then Dover, Delaware. He was a proud graduate in the class of 1955 at Caesar Rodney High School and maintained connections with his classmates... View Obituary & Service Information

The family of Bruce Chappelle created this Life Tributes page to make it easy to share your memories.

Music, family, and learning filled the life of Bruce Chappelle...

Send flowers to the Chappelle family.