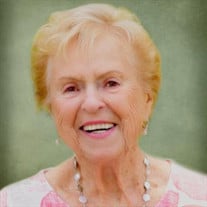 Blanche P. Messick, 92, of Rehoboth Beach Delaware, formerly of Centreville, Delaware passed away on Wednesday, April 7, 2021 surrounded by her loving family. She was born in New York City to the late Harry Pack and his wife Anna Obzut Pack. As the child of a Russian Jewish immigrant father and a first - generation American, Polish Catholic mother, Blanche had a deep-seated awareness of the value of every person. Eventually her family moved to Sussex County where they were pioneers in the early poultry industry. Later they owned the Bottle and Cork for 14 years until 1969. That was where Blanche met the love of her life, Larry Messick, the trumpet player in a Dixieland band. They married in 1964 and shared a family of five children. For over 20 years Blanche was a fiercely dedicated and beloved preschool teacher at Tower Hill School. In retirement, Larry and Blanche moved back to Rehoboth where they thrived on the excitement and camaraderie of hosting family and friends. Blanche was Captain of the reigning champion trivia team “Rain Man “at the Rehoboth Beach Country Club. She loved it! Blanche was also a serious bridge player for 75 years and her Wednesday group was a mainstay she thoroughly enjoyed. Blanche revered her friends, young and old, and kept in touch with dozens by phone, text, email, and FaceTime. She was gracious and vivacious and loved her cheerful home full of books and music. In addition to her parents, Blanche was preceded in death by her beloved sister, Charlotte Campbell, in August 2020. She is survived by her children: Andrea Scott and her husband Rodney, Daniel Stokes and his wife Susan Henderson, Mimi Otto and her husband Thomas, Valarie Elliott and her husband Richard, and L. Thomas Messick and his wife Alice Bennett; her grandchildren: Megan Martz, Peter Martz, Molly Scott, Nat Scott, Susanna Gewirtz, Katherine Stokes, Nick Stokes, Alex Otto Newhook, Tyler Messick, Victoria Messick, Julia Elliott - Ozug, Gibb Elliott and Scott Elliott; her 13 great grandchildren; her nieces: Susie, Shelly, and Bunny; and her bonus son Carl Grimm. A Celebration of Blanche's Life will be held on Monday, June 28, 2021 at 11:30 AM at the Rehoboth Beach Country Club, 221 West Side Dr, Rehoboth Beach, DE 19971. In lieu of flowers, the family suggests contributions in Blanche's memory to the Rehoboth Beach Public Library, 226 Rehoboth Avenue, Rehoboth Beach, DE, 19971. Please sign the virtual guestbook located on the tribute page.

Blanche P. Messick, 92, of Rehoboth Beach Delaware, formerly of Centreville, Delaware passed away on Wednesday, April 7, 2021 surrounded by her loving family. She was born in New York City to the late Harry Pack and his wife Anna Obzut Pack.... View Obituary & Service Information

The family of Blanche P. Messick created this Life Tributes page to make it easy to share your memories.

Send flowers to the Messick family.