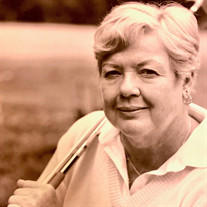 Bernadette Marie (Baker) Reid, age 86 of Rehoboth Beach, DE, passed away on Saturday, January 18, 2020 with her daughters by her side. She was born on January 3, 1934 in Philadelphia, PA, daughter of the late Francis P. and Helen (O’Neill) Baker. Bernie spent her early years in Oaklyn, New Jersey with her father, mother, and her older brother, Thomas Francis Baker. She graduated from Collingswood High School in Collingswood, New Jersey and attended Rutgers University. She later met her husband Gordon Wells Reid skiing at the Gray Rocks resort in Mt Tremblant, Canada, and they were married for almost 54 years. Bernie had a knack for numbers and through the years was a bookkeeper for a lumberyard, a tire company, and several restaurants. She also prepared taxes for various accounting firms including H&R Block and Jefferson, Urian, Doane, & Sterner in Georgetown, DE. Bernie was an avid golfer, a five-time club champion at Ramsey Golf & Country Club in Ramsey, New Jersey, two-time club champion (gross in 1994 and net in 2010) and two-time presidents cup winner at Kings Creek Country Club in Rehoboth Beach, Delaware. She also won multiple senior and super senior championships at Sussex Pines Country Club in Georgetown, Delaware. Bernie also enjoyed three holes-in-one after they moved to Rehoboth Beach. Bernie was known for her consistent “straight down the middle” golf, short game and passion for the game. Those that played against her also knew her as a fierce competitor. Bernie and Gordon raised their two daughters, Lesley and Laurie in West Springfield, Massachusetts and later Ramsey, New Jersey. They later retired to Rehoboth Beach in 1994 and built a home in Kings Creek Country Club in 1996, where they enjoyed golf and their friends in the community and frequent visits from their three grandchildren, Lindsey, Reid and Allison. Bernie was past president of the Woman’s Peninsula Golf Association and past treasurer of both the Delaware Women’s Golf Association and of the Kings Creek Country Club Ladies Golf Association. She served on the Board of Directors for Ramsey Golf & Country Club and for the Kings Creek Home Owners Association. She also volunteered at Beebe Hospital, St Edmond Church, and the Lewes Senior Activity Center. In addition to her parents, Bernie was preceded in death by her husband, Gordon Wells Reid. She is survived by her two daughters: Lesley R. Corydon (David) of Rehoboth Beach, DE and Laurie R. Bruner (David) of Voorhees, NJ; her brother, Thomas Francis Baker; and her grandchildren: Lindsey Marie Corydon, Reid Scott Bruner, and Allison Grace Bruner. Bernie was a loving and caring wife, mother, grandmother, sister, aunt, friend, and golf inspiration to many and will be greatly missed. A Mass of Christian Burial will be held on Saturday, January 25, 2020 at 12:00 PM at St. Edmond Catholic Church, 409 King Charles Avenue, Rehoboth Beach, DE, where friends may visit beginning at 10:30 AM. Interment will be private. In lieu of flowers, the family suggests contributions in Bernie’s memory to the DSGA Scholarship Fund: 1319 Carruthers Lane, Wilmington, DE 19803, or Beebe Medical Foundation: 902 Savannah Rd, Lewes, DE. 19958. Please sign the online guest book located on the tribute page.

Bernadette Marie (Baker) Reid, age 86 of Rehoboth Beach, DE, passed away on Saturday, January 18, 2020 with her daughters by her side. She was born on January 3, 1934 in Philadelphia, PA, daughter of the late Francis P. and Helen (O&#8217;Neill)... View Obituary & Service Information

The family of Bernadette Marie Reid created this Life Tributes page to make it easy to share your memories.

Send flowers to the Reid family.