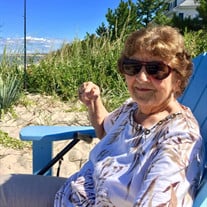 Barbara Jean Yeager of Lewes Delaware passed away on Saturday May 2nd at the age of 87. Barbara was born at her family’s homestead in Dover, New Jersey on September 15th 1932. daughter of Andrew and Julia Ruschak and she was the youngest of five children. Barbara graduated from Rockaway High School class of 1947 at the age of 15. After attending business school in East Orange, New Jersey she began her 33-year career in civil service eventually working for four branches of the US military. She began her career working for the US Marine Corps in Camp Lejeune, North Carolina. In 1963 when her husband was transferred to the US Naval Facility in Lewes, DE she began working for the US Air Force in Dover, Delaware. After the death of her husband in 1967, at the age of 34 with four children to support, she was able to transfer to the Naval Facility in Lewes to be closer to home. When the Navy closed the base in Lewes in 1981, she began the final chapter of her career working for the US Army on Capitol Hill in Washington, DC as a Congressional Liaison. She worked there until her retirement in 1995. In retirement she moved back to the family home in Lewes where she resided until her passing. Barbara cherished her four children and their spouses, her grandchildren and her great grandchildren and always looked forward to hosting for the Holidays and her famous family July crab parties. Many a Cape Region Alumni will remember Barbara Jean and know that they were always welcome at the Yeager household. Barbara was preceded in death by her parents, her husband Stephen B. Yeager, her siblings, William Ruschak(Alice), Ann Biddescombe(Richard), John Ruschak(Anne), Mary Bixler(Billy). She is survived by her children Barbara Helsdon (Dave) of Lincoln, DE, Stephen M. Yeager (Tracey), Sue Smith (Steve), and Stephanie “Teddie” Purnell (Harold II) all of Lewes, DE. She is also survived by seven grandchildren James V. Reed IV (Sheila), Jennifer Knox (Andrew), Harold Purnell III (Erin) Elizabeth Straub (John), Victoria Purnell, Mary “Katie” Yeager, Allie Jean Yeager, 6 great grandchildren and many nieces and nephews. She will also be greatly missed by her Lunch/Cape H.S. sports buddies, Marlys Cowan, Freda Burton, Ann Moore and Charlotte Bastian. Barbara will be interred at Arlington National Cemetery in Arlington, VA with her late husband at a date TBD. Services will be private with a celebration of life to be held at a later date. In lieu of flowers the family suggests donations to the Lewes Little League P.O. Box 107, Lewes, DE. 19958. Please sign the online condolences below.

Barbara Jean Yeager of Lewes Delaware passed away on Saturday May 2nd at the age of 87. Barbara was born at her family&#8217;s homestead in Dover, New Jersey on September 15th 1932. daughter of Andrew and Julia Ruschak and she was the youngest... View Obituary & Service Information

The family of Barbara Jean Yeager created this Life Tributes page to make it easy to share your memories.

Barbara Jean Yeager of Lewes Delaware passed away on Saturday...

Send flowers to the Yeager family.