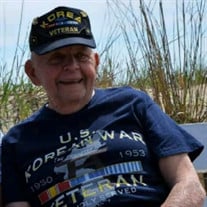 Arthur James "Jim" Wolfe, age 92, passed away peacefully at his home on Saturday, June 5, 2021 in Lewes, DE, surrounded by his loving family after a brave battle with Alzheimer’s disease. As with anything he was presented, Jim approached his diagnosis with great strength and courage to the very end. Jim passed in the early morning hours not long after midnight, on the day he would have celebrated his 67th wedding anniversary with his beloved wife, Esther Wolfe. The son of Sallie A. Kettering, Jim was born on December 18, 1928 in Birmingham, AL. A hardworking young man with a deep love of sports, Jim joined the United States Army and served in Korea during the coldest and most intense years of conflict: 1951-1953. Soon after returning to the States, Jim married Esther on June 5, 1954. Together, they raised three daughters in the Northern Virginia area. Their three daughters are Sharon Wolfe Pendley (Dan) of Aydlett, NC, Karen Pownall (Rick, deceased 2014), of Lake Frederick, VA, and Janice Wolfe-Easley (Don), of Springfield, VA. He is also survived by his grandchildren: Nicole Dunn of Lorton, VA, Christopher Pownall (Sara), of Winchester, VA; and his great grandchildren: Kaitlyn and RJ Pownall. While raising his family, Jim actively participated on baseball and basketball teams, coaching men’s basketball at Marymount University in Arlington and women’s basketball at George Mason University in Fairfax. Avid fans of the Washington Redskins, Esther bought season tickets for Jim as their first Christmas gift. They held those tickets for 67 years; from early fall days when they sat on bleachers at old Griffith Stadium, to the decibel-busting years inside RFK Stadium, to two 50-yard-line seats at what is now Fed Ex field. With retirement, Jim and Esther moved to Lewes, DE to be near the ocean and a short ride from their daughters in VA. It was in retirement that Jim found his true calling as a dedicated servant to those who have served in the military. As a faithful 20-year member of the Korean War Veterans Associations (KWVA), Jim was a highly successful contributor to numerous fundraising activities (golf tournaments, raffles, and flapjack breakfasts). In addition to his KWVA fundraising efforts, Jim proudly supported Wounded Warrior Amputee softball teams. He was always seen wearing a cap that proudly and boldly declared him a “KOREA VETERAN”. His daughters recall that their father was “a good man and a great father” who taught them the importance of family, treating his wife “like a queen,” and always displaying an “infectious” smile and a fun-loving sense of humor. A dog lover too, Jim always carried a pocketful of treats. Our handsome and beloved husband, father, grandfather, great-grandfather, American hero, and friend will live on in our hearts forever. Hail to the Redskins! No services have been planned at this time. Donations in Jim's memory can be made to your favorite charity or a simple act of kindness to someone in need will be greatly appreciated. Please sign the virtual guestbook located on the tribute page.

Arthur James "Jim" Wolfe, age 92, passed away peacefully at his home on Saturday, June 5, 2021 in Lewes, DE, surrounded by his loving family after a brave battle with Alzheimer&#8217;s disease. As with anything he was presented, Jim approached... View Obituary & Service Information

The family of Arthur James "Jim" Wolfe created this Life Tributes page to make it easy to share your memories.

Arthur James &quot;Jim&quot; Wolfe, age 92, passed away peacefully at his...

Send flowers to the Wolfe family.