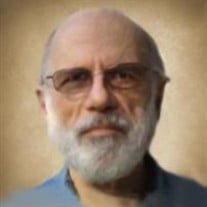 ✡ In Loving Memory of Arthur Robert Landy Devoted Father and Grandfather August 17th, 1937 - May 27th, 2021 ✡ Arthur Robert Landy, 83 of Milton, Delaware, passed away from a short illness on Thursday, May 27th, 2021 at Genesis Milford Center in Milford, Delaware. He was born on August 17th, 1937 in Bronx, New York, son of the late Julius and Florence Landy. He grew up playing one wall handball at 13 years of age which eventually became a prominent passion of his until he retired from the sport in 2016. Two of his most successful athletic accomplishments included winning the Eastern Regional Collegiate Doubles Handball Championship and the Eastern Inter-Collegiate Four-Wall Doubles Handball Championship - both in 1958. In addition to playing handball, Arthur enjoyed watching boxing, playing and listening to classical piano and guitar and listening to traditional jazz music. He played the saxophone in his high school band. Having graduated from DeWitt Clinton High School in 1955, he attended The City College in New York where he met Elaine Feder in French class whom he married on December 27th, 1959 upon their divorce in 1972. Personally, Arthur has always had a zest and love for life while finding his retirement to be a wonderfully satisfying and fulfilling experience. Throughout his life, he has always had an affinity for helping people through his chosen fields of psychology and social work which have included work experiences as Chief Psychiatric Social Worker with the Austin Child Guidance Center from 1969-1972 (Austin, Texas), Psychiatric Social Worker at Kaiser Santa Clara Hospital from 1972-1973 (Santa Clara, California) and Senior Counselor at Gary Job Corps from 1975-1999 (San Marcos, Texas). In 1999, Arthur left his job at Gary Job Corps Center and moved to Pembroke Pines, Florida to take care of his ailing mother Florence Landy. In 2003, Arthur moved to Columbia, Maryland to be closer to his daughter and son. His last place of residence was in Milton, Delaware where he lived with his son. He is predeceased by his ex-wife Elaine Feder Alford and his sister in law Faye Landy. Arthur is survived by his two children: Lisa Landy Ehrlich (Damon) of Olney, Maryland, and Robert Landy (Nickolas Baker) of Rehoboth Beach, Delaware; his two grandsons; Jeremy Herschel Ehrlich of Austin, Texas and Brandon Frank Ehrlich of Baltimore, Maryland; and a brother, Bill Landy of Australia. As a very giving human being and loving father, Arthur will be sadly missed and never forgotten yet his heartfelt memories, kindness towards others and accomplishments in life will always be remembered and cherished. Please sign the virtual guestbook located on this tribute page

The family of Arthur Robert Landy created this Life Tributes page to make it easy to share your memories.

✡ In Loving Memory of Arthur Robert Landy Devoted Father and...

Send flowers to the Landy family.