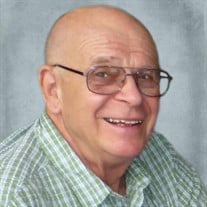 Anthony Walch Jr. "Tony", age 88 of Millsboro, DE, passed away on Friday, May 1, 2020 of natural causes. He was born on December 17, 1931 in Washington, DC, son of the late Anthony Sr. and Ethel Mae (Cheney) Walch. Tony grew up and lived most of his life near family in Gambrils, MD. After completing high school, Tony was drafted into the U.S. Army and served as a Sergeant in the Korean War. While in the service he met and married his wife of 65 years, Elizabeth (Evalyn) Thompson, of Smithland, Kentucky, whom he always described as “the best friend I ever had.” Tony and Evalyn continued to live in Maryland until they retired and moved to Onancock, Virginia in 1987. Tony spent the majority of his career working at NASA’s Goddard Space Flight Center. He began there as an apprentice machinist and rose to lead the Center’s Machining Branch and NASA’s first Computer Aided Manufacturing program. After retirement at age 55, he and Evalyn (a horticulturist) realized a lifelong dream by purchasing a 150-acre farm on Pungoteague Creek on the Eastern Shore of Virginia. Working together, they placed the farm into a permanent conservation easement with the Virginia Eastern Shore Land Trust and created showplace gardens and wildlife habitats that were featured in garden tours and magazines. Tony was extraordinarily talented and creative, known widely as someone who could build or fix absolutely anything. He designed and built both of the houses in which he and his wife lived. He was also well known for telling really bad jokes. While working at NASA, Tony built hobby telescopes in his basement and talked to school classes about the space program. He had a passion for woodworking and bird carving and won awards for his carvings at the Ward Museum shows in Salisbury, Maryland. He also enjoyed beekeeping, making wine, baking, crabbing and fishing, and photography. He was an active member of Andrew Chapel United Methodist Church in Onancock, VA. Both he and Evalyn resided at Brandywine Living at Seaside Pointe in Rehoboth Beach since February 2020. Above all, Tony cherished time spent with those he held most dear. He was a loving and devoted husband, father, grandfather, and friend who was loved by many and will be deeply missed by all who knew him. Tony was preceded in death by his brothers: Carl and Joseph. He is survived by his beloved wife, Evalyn; his daughters: Marianne Walch and Sandra West; and his granddaughter, Joanna Lonergan. Due to the COVID-19 pandemic, services are private. In lieu of flowers, the family requests contributions in Tony's memory to the Virginia Eastern Shore Land Trust, PO Box 1114, Exmore, VA 23350, or veslt.org, or any charity of choice. Please sign the online guestbook located on the tribute page.

Anthony Walch Jr. "Tony", age 88 of Millsboro, DE, passed away on Friday, May 1, 2020 of natural causes. He was born on December 17, 1931 in Washington, DC, son of the late Anthony Sr. and Ethel Mae (Cheney) Walch. Tony grew up and lived most... View Obituary & Service Information

The family of Anthony Walch Jr. created this Life Tributes page to make it easy to share your memories.

Send flowers to the Walch family.