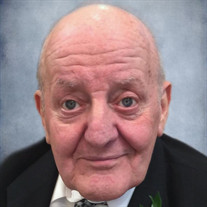 Anthony Daniel Ritts, age 86 of Lewes, DE, passed away peacefully on Thursday, January 14, 2021. He was born on February 6, 1934 in Philadelphia, PA, son of the late Dominic and Carrie (Perugini) Ritts. Anthony graduated from Lincoln Prep in 1951 before joining the military. A proud veteran who served his country in the 82nd Airborne, he was stationed at Ft. Bragg, NC from 1956 - 1958. Anthony later coached little league (Pop Warner) in Bensalem, PA in 1960 and was an avid hunter for many years. Always involved, he was also a member of the Sheet Metal Workers Local Union 19 in Philadelphia, PA while living in Moorestown, NJ. A longtime resident of Moorestown, Anthony retired from Cutler Industries in 1996 before moving to South Hampton, NJ. Hoping to fully enjoy retirement and his love for the sea, he moved from New Jersey to Lewes, DE, where he spent the remainder of his life with his wife, Marlene. While living in Lewes, Anthony became a member of American Legion Post 17, the Knights of Columbus, Msgr. J. Desmond Council #13348, and Knights of Columbus Patriotic 4th degree Assembly 2413, Georgetown, DE. Anthony was a talented woodworker who enjoyed spending his time building things and tending to his robust garden and colorful flowers around his home. Faith played an important role in his life and he attended mass regularly at St. Jude the Apostle Catholic Church in Lewes. Anthony's resiliency, strength and wonderful sense of humor will be greatly missed, and he will continue to be loved by all. In addition to his parents, Anthony was preceded in death by his sister, Angelina (Ritts) Reynolds of Southampton, NJ. He is survived by his loving wife of 22 years, Marlene (Kaminski Wilhelm) Ritts; his daughters: Donna (Ritts) Rice (John), Traci (Wilhelm) Imel (Josh), Heather (Ritts) Arena (Frank); his grandchildren: Kellie (Gifford) Morrotto (Nicholas), Karlie (Gifford) Thomas (Drew), and James Gifford; his great granddaughter, Kennedy James Morrotto; his numerous nieces and nephews; his brothers: Ronald Ritts of Bensalem, PA and Francis Ritts (Betty), of Southhampton, NJ; and his sister: Mary Ann Ritts of Southhampton, NJ. Due to Covid-19 restrictions, there will be no in - person service. A Celebration of Life via live streaming will be held on Thursday, January 21, 2021 at 3:00 PM. All are welcome to join the stream by visiting the following link: http://www.parsellfuneralhomes.com/obituaries/permalink/9803615/LTWebcast In lieu of flowers, the family suggests donations in Anthony's name to American Heart Association, www.heart.org/en/get-involved/ways-to-give, or American Stroke Association, www.americanstroke.org/donate. Please sign Anthony’s online guest book on this page.

The family of Anthony Daniel Ritts created this Life Tributes page to make it easy to share your memories.

Send flowers to the Ritts family.