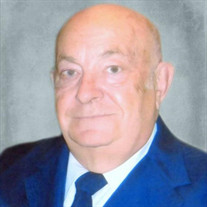 Anthony "Tony" Gerard DiMauro, age 88 of Lewes, DE, formerly of Yonkers, NY, passed away on Saturday, March 14, 2020 at his home. He was born on June 3, 1931 in New York, NY, son of the late Gaetano and Phillipa DiMauro. Mr. DiMauro was a graduate of Cathedral High School in New York City and earned a Bachelor's Degree from Iona College in New Rochelle, NY. He was a proud veteran, having honorably served in the US Army and the Auxiliary Coast Guard. Mr. DiMauro made his career as a credit manager, retiring from American Express after many dedicated years. He was an avid outdoorsman, enjoying fishing and hunting, in particular. Mr. DiMauro was also a gun collector, a card-carrying member of the NRA, and a skilled woodworker. Above all, he cherished time spent with those he held most dear. He was a loving and devoted husband, father, grandfather, great-grandfather, brother, and friend who will be deeply missed by all who knew him. In addition to his parents, Mr. DiMauro was preceded in death by his daughter, Donna Ruggiero; and his sister, Mary Imperato. He is survived by his beloved wife, Julie DiMauro of Lewes, DE; his son, Thomas DiMauro (JoAnn); his daughters: Marion Berardi (Ron) and Gina DeMasi (Frank); his step-daughters: Stephanie Long and Karin Long; his 12 grandchildren; his 6 great-grandchildren; his sister, Tina Coco; and his several nieces and nephews. A prayer service will be held on Tuesday, March 17, 2020 at 7:00 PM at Parsell Funeral Homes and Crematorium, Atkins-Lodge Chapel, 16961 Kings Highway, Lewes, DE, where friends may call beginning at 6:00. Viewing will resume after the prayer service until 8:00 PM. Entombment will take place at Ferncliff Cemetery, Hartsdale, NY, at a later date. Donations may be made in Mr. DiMauro's memory to the National Kidney Foundation, 30 East 33rd Street, New York, NY 10016, or to the ASPCA, ASPCA Tributes, 520 8th Avenue, 7th Floor, New York, NY 10018. Please sign the online guestbook located on the tribute page. In lieu of flowers, the family requests contributions in Mr. DiMauro's

Anthony "Tony" Gerard DiMauro, age 88 of Lewes, DE, formerly of Yonkers, NY, passed away on Saturday, March 14, 2020 at his home. He was born on June 3, 1931 in New York, NY, son of the late Gaetano and Phillipa DiMauro. Mr. DiMauro was a... View Obituary & Service Information

The family of Anthony Gerard DiMauro created this Life Tributes page to make it easy to share your memories.

Send flowers to the DiMauro family.