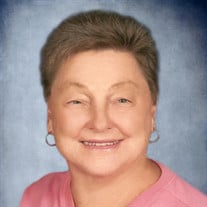 Anna Marie Hogsten, age 84 of Frankford, DE, passed away on Wednesday, December 29, 2021, after a valiant fight against cancer. "Marie" as she was called by her friends and family was born on February 7, 1937, in Orange, VA, daughter of the late Willie I. "Buck" and Anna Belle (Deane) Foster. Marie grew up in Orange, VA, and graduated from Orange County High School class of 1955. She enrolled at James Madison College in Harrisonburg, VA where she excelled in field hockey and competition dance, graduating with a degree in Physical Education in 1959. She proudly sported a state of Delaware vanity tag on her car “JMU 59” and was a lifetime fan, often cheering, “Go Dukes”! Later she attended Salisbury University and achieved a master’s degree in Education. In 1959, she married the love of her life and high school sweetheart James “Marvin” Hogsten and moved to Felton, DE. Jim, as she called him, attended Wesley and Delaware State. She became a Physical Education teacher and basketball coach at Felton High School from 1960 to 1964. They then moved to Dover where they both taught at Holy Cross High School from 1964 to 1968. In 1968, they both went to work for the Lake Forest School District where Marie was a Physical Education teacher at Lake Forest South Elementary until she retired in 1988. During this time, Marie and Jim raised two boys. As a family, they loved to go on camping trips especially enjoying the Delaware Seashore State Parks and Cape May, NJ. These were her most cherished times. As time went on, she and Jim loved to take their camper in the winter and travel to Florida to soak up the sun and meet wonderful new people, even joining a camping group that supported and promoted camping. Marie took part in social groups such as AARP, Red Hatters and volunteered at the CHEER Center in Ocean View, DE. She and Jim attended St. Martha’s Episcopal Church, and the highlight of her week was to go to the 8 o’clock service and then go to breakfast for fellowship and food; always grabbing a to-go bag for a bite to eat later. Upon Jim’s passing, Marie decided to create a bucket list of trips and adventures including trips to Hawaii flying in a helicopter, Alaskan Cruise flying in a plane that landed on the water, New Mexico for a hot-air balloon festival, Charlestown SC, Niagara Falls, Canada and the “cruise from hell” Cape Cod and Nova Scotia. She loved to read books, completing word puzzles, painting scenes from the Delaware and Cape May shores, and watching Wheel of Fortune and Jeopardy. Throughout her life, she enjoyed attending her children and grandchildren’s athletic, artistic, academic and music endeavors. In addition to her parents, Marie was preceded in death by her husband, Jim. She is survived by her two sons: James “JD” Hogsten (Debbie) and Lance Hogsten (Christine); her grandchildren: Steven Hogsten and his fiancé, Virginia Vassotti, Matthew Hogsten, and his partner Emily Neumann, Madison Hogsten, and Jordyn Hogsten. Marie’s family would like to thank her former basketball players that helped her so much over the years. Due to the pandemic, the family has decided to have a celebration of life in late April at St. Martha’s Episcopal Church in Bethany Beach, DE. She will be inurned at the Delaware Veterans Memorial Cemetery in Millsboro, DE with her beloved Jim. Memorial contributions may be made in Mrs. Hogsten's memory to St. Martha’s Episcopal Church, 117 Maplewood Street, Bethany Beach, DE 19930, or the CHEER Center, 30637 Cedar Neck Road, Ocean View, DE 19970. Please sign the virtual guestbook located on the tribute page.

Anna Marie Hogsten, age 84 of Frankford, DE, passed away on Wednesday, December 29, 2021, after a valiant fight against cancer. "Marie" as she was called by her friends and family was born on February 7, 1937, in Orange, VA, daughter of the... View Obituary & Service Information

The family of Anna Marie Hogsten created this Life Tributes page to make it easy to share your memories.

Send flowers to the Hogsten family.