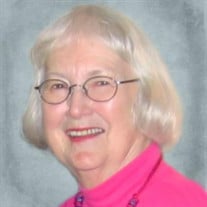 Ann Eliza Erdman, age 89 of Lewes, DE, passed away on Saturday, September 12, 2020, at Beebe Healthcare in Lewes. She was born on August 31, 1931 in Hampton, VA, daughter of the late Levi C. and Ann R. Erdman. A former Harrisonburg, VA resident, Ann's family moved to the Shenandoah Valley of Virginia in 1933 following her father entering active duty with the Civilian Conservation Corps (CCC). Ann attended schools in Grottoes VA, Honolulu HI, and Maplewood NJ, graduating from Columbia High School in 1949. After high school she attended James Madison College for two years. When her family moved back to the Valley in 1951, Ann worked in administration at the Merck & Co. Inc. plant in Elkton, VA for several years. She then reenrolled at James Madison College and obtained a degree in elementary education, after which she taught in Harrisonburg for two years. Following this she joined the Peace Corps, serving in Colombia, South America. Afterward, Ann moved to Washington, DC, working at various jobs until joining the US Department of Health, Education, and Welfare. She continued to work for the US Government until she retired and moved to The Moorings at Lewes, DE. "Liza”, as she was known to family, had a strong and independent spirit. She was highly intelligent and endlessly curious. As the eldest child in her family, she was a groundbreaker for her siblings. Ann was generous, loving, and always considerate of others, going out of her way to make sure everyone was okay. She traveled extensively with friends and family whenever possible. This love possibly started as early as 9 years old, when the family moved to Hickam Field in Hawaii. She was there when the Japanese attacked on December 7, 1941. The photographs she took during many of her trips show an appreciation of friends, art, architecture, and gardens along with a fun sense of humor. Above all, Ann cherished time spent with those she held most dear. She was a loving and devoted sister, aunt, and friend who will be deeply missed by all who knew her. In addition to her parents, Ann was preceded in death by her sister, Evlyn E. Bassols. She is survived by her sister, Lois Beaufait (Fred); and her brothers, George Erdman (Marilyn) and Richard Erdman. She was "Aunt Ann" to four nephews and seven nieces. She was Grand-Aunt Ann to ten girls and four boys. She even became a "Great-Grand-Aunt", of which she was immensely proud. A private service will be held at Eastlawn Memorial Gardens in Harrisonburg, VA. In lieu of flowers, the family suggests contributions in Ann's memory to any charity of choice. Please sign the online guestbook located on the tribute page.

The family of Ann Eliza Erdman created this Life Tributes page to make it easy to share your memories.

Send flowers to the Erdman family.