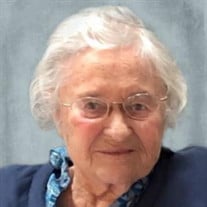 Well-known regional “mask maker” and potter Amelie “Amie” Sloan of Pinewater Farm, Harbeson passed away on December 31, 2020 at the age of 101, following a short illness. She was a proud native Delawarean, having been raised in Dover and Rehoboth Beach. Born on February 23, 1919 in Wilmington, Delaware, Amie was the daughter of James Hall Anderson and Blanche Virden Brown Anderson of Dover. She graduated high school from George School, a Friends School in Pennsylvania. Amie attended Barnard College and graduated from UNC Chapel Hill, NC majoring in History. Following college, she returned to Delaware to marry Samuel Sloan and learned to be a "farm wife.” While raising her family, she spent 20 years teaching elementary school in Millsboro and tutoring homebound students all over Sussex County. Amie had a second career in the arts. From childhood, she had a fascination with the exotic, especially faces of peoples of the world. Out of this interest, she learned to hand-build and sculpt in clay and became an avid "mask maker" and potter. Amie was a life-long member of the Rehoboth Art League and attended the opening ceremonies in 1938. She sold and exhibited her pieces at regional craft shows and at the Rehoboth Art League. For many years, she supervised an open studio for budding potters. In 2014, the hand-building studio was dedicated in her name. Above all, Amie was curious about the world and the people in it. To that end, she taught hand building pottery class and actively participated in classes at the Osher Center for Lifelong Learning in Lewes until age 100. An avid reader, Amie was a member of two book clubs well into her 90s. She had wide interests in history, art, culture, and what people "were up to,” always keeping up with family and friends. She was known for her quick mind, cheery voice, welcoming demeanor, and interest in other people's lives. Amie is survived by her three children: Samuel Morris Sloan, Jr. and his wife Lyn of Annapolis, Maryland, Sara Sloan Campbell of Fircrest, Washington, and Henry Hall Sloan of Harbeson, Delaware; her 9 grandchildren; her 16 great-grandchildren; and her 5 great-great-grandchildren. She will be sorely missed by her friends and family. A celebration of life will be announced at a later date. In lieu of flowers, donations may be made in her name to the Rehoboth Art League, 12 Dodds Lane, Rehoboth Beach, DE 19971, or St. George's Chapel, 20274 Beaver Dam Road, Harbeson, DE 19951.

The family of Amelie "Amie" Sloan created this Life Tributes page to make it easy to share your memories.

Send flowers to the Sloan family.