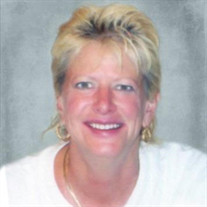 Alison Long Banister, age 61, passed away on Tuesday, April 28, 2020. Alison was born in York, PA on June 24, 1958, the first child of Eleanor (Kindig) and Ralph Ziegler, Jr. The family moved to Birmingham, MI in 1966. Many of her childhood summers were spent at church camp; first as a camper and later, as a counselor. Alison's adventurous spirit drew her to working with horses, teaching the younger children to ride. After graduating from Seaholm High School, Alison attended Stephens College in Columbia, MO. She majored in Psychology, but her love of horses continued with her involvement in their equestrian program. Alison married Mark Banister shortly after graduation, moving to Farmington, MI. It was there they raised their 3 children. Alison will be remembered for her forthright personality, her tremendous sense of humor, described as a force of nature, with a laugh that made everyone around her smile. She had enormous conviction in her faith, and her servant spirit was felt by many she encountered in her life. Alison was a loving and devoted mother, daughter, sister, and friend who was loved by many and will be deeply missed by all who knew her. Alison was preceded in death by her father, Ralph Ziegler, Jr. She is survived by her children: Daniel, Ryan, and Lindsay; her mother, Eleanor; her former husband Mark; her brothers: Ralph III (Julie) and George (Lisa); her sister, Meg Pryor: her former mother-in-law, Jean; and her many nieces and nephews. Due to the COVID-19 pandemic, a celebration of Alison's life will be held a later date. In lieu of flowers, the family suggests contributions in Alison's memory to HOME OF HOPE, Delmarva Adult and Teen Challenge, PO Box 1271, Seaford, DE 19973, or Ascension St. John Foundation, 19251 Mack Avenue, Suite 102, Grosse Pointe Woods, MI 48236.

The family of Alison Long Banister created this Life Tributes page to make it easy to share your memories.

Send flowers to the Banister family.